Team Philippines has competed in the 2018 Street Child World Cup in Moscow. We are proud our girls reached the Semi Finals and were feared on the pitch, and respected and admired off it.

The tournament is over, but the journey has just begun. You can now join us at the British School of Manila on Saturday, May 26, for Fairplay’s conference Team Philippines: Life After Russia. You can RSVP here at the Facebook Event Page.

We will be talking about why we play, why we run Team Philippines, and what the next chapter in our story is. Players from Team Philippines will be sharing their experiences, with talks from the Coach and Team Manager too.

The day will be finished with a press conference for the attending media, as we look back at a successful time in Russia, and then shift our focus to what we can do improve the lives of children in poor communities in the long-run. A documentary is being made about the experiences of the team before, during, and after the Street Child World Cup, with short videos of the highlights from Russia being made too.

In the meantime check out the training camp for the girls in this video below: 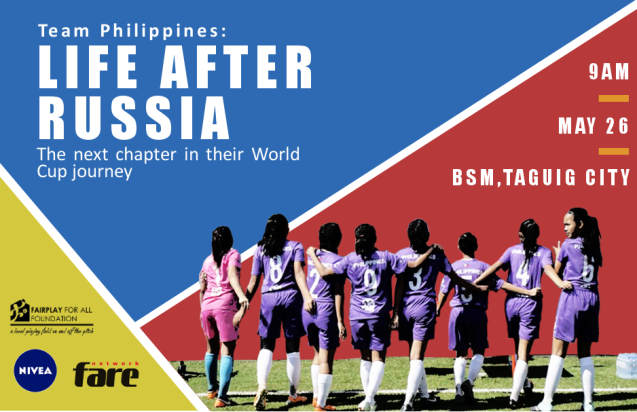 We also want to thank our fantastic sponsors who have made it possible for us to come this far:

NIVEA are sponsoring the major costs for Team Philippines to join and compete in the 2018 Street Child World Cup. Together we hope to show that when we care for families from the streets and the slums, we all win.

The Kulczyk Foundation are a Polish group support our sports facilities in Payatas, as well as sponsoring University Scholarships for Team Philippines and their Head Coach!

Fairplay took management of Team Philippines for the 2014 Street Child World Cup and onwards. The experience was challenging, fun, exhausting, and inspiring all at once.

9 boys and 9 girls came from different communities all across the Philippines to represent the country. The boys reached the Quarter Finals, losing on penalties to Pakistan. Meanwhile the girls defeated every opponent on the way to the Final against hosts Brazil. A narrow 1-0 loss meant the girls had to settle for silver.

Most importantly half of the children now have scholarships through football at University, courtesy of their home organisation. Others are working and others are still in High School preparing for University.

A huge thank you to our 2014 Major Sponsors